Despite what would probably seem the common-sense view of the relationship, approaches to sustainability and veganism, at least in wine-making, don’t necessary overlap. Indeed, depending as always on how you define things, at times they are in opposition to each other.

This is an observation worth exploring. I am not taking sides in the issue. Rather, my goal here is to point out that things are, as always, complicated, why this is so, and what the implications might be.

I am going to focus on the vegan aspect, and what it means for a wine to be ‘vegan’ or ‘vegan friendly’. (I’ve seen both terms used.) I’ve written in previous posts about sustainability, and people follow the link if they want a refresher. With that said, there are two basic areas to think about when talking about vegans wines.  The first one is certification. There are various schemes, such as V-Label, Eve Vegan, or the Vegan Society that certify a product as vegan according to their guidelines. The second area is a broader consideration of the use of animals / animal products in the production of wine.

The general criteria for certification (as in other vegan products) is that the food / drink does not contain animal products, including additives and during processing, and no animals were used to test it. This is where the attention tends to fall on vegan wines, and where wines may fail to meet the required standards.

Many wines undergo a process known as ‘fining.’ Fining is the removal of certain substances (colloids) that may result in cloudiness in the wine, but are too small to remove via physical filtering. Some of the fining agents are animal-based. These can include egg whites / albumin, gelatine, casein (from milk) or isinglass (a form of gelatine traditionally derived from fish bladders). Once upon a time ox blood was used to fine some red wines as well.

Although the fining agents will not be in the final wine, the wines aren’t considered vegan given the use of animal products during the processing of the wine. (Readers of this blog will know most low-intervention wine-makers eschew fining.) This aspect is relatively straightforward, and here veganism does tend to overlap with sustainability. Things change, however, when we broaden our view of what veganism is. 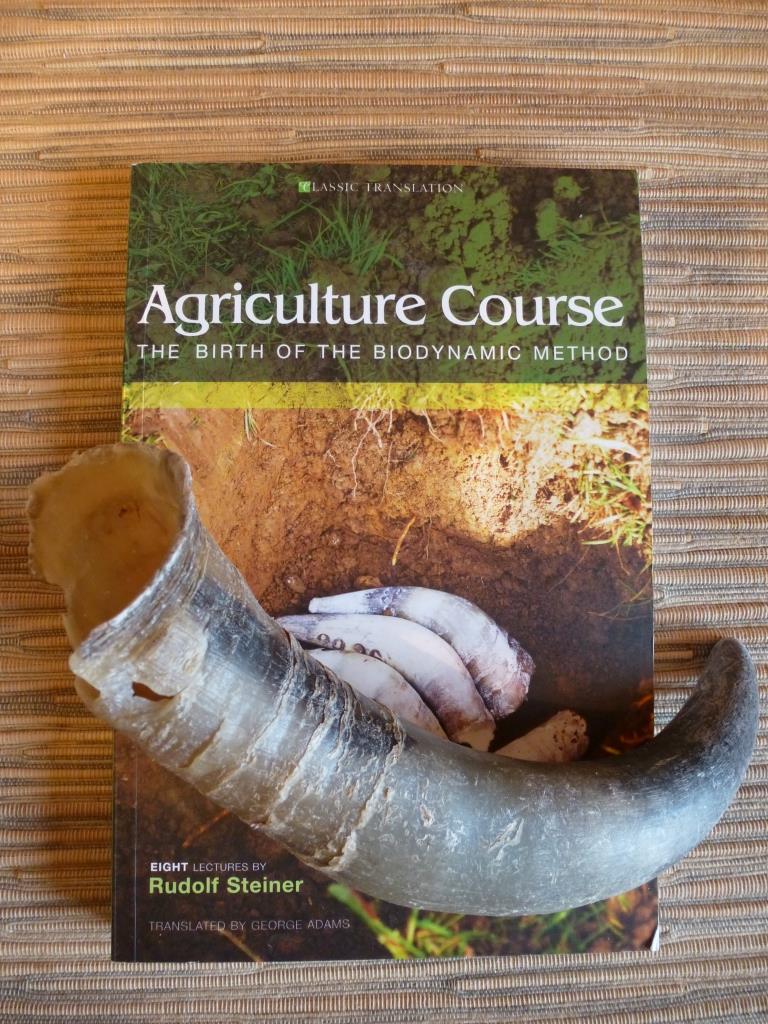 Rudolf Steiner’s Agriculturel Course – the basis of biodynamics – draws on animal products, such as cow horns.

Some people take the vegan concern for animal welfare and the use of animal products a step further. In terms of wine, this might include looking to the conditions under which the grapes are grown, which are currently not considered when certifying wine. There are three points I’ll cover here, although doubtless there are more.

The first is the use of animal labour. There’s a movement in sustainable wine-making to return to horses to draw carts, and where similar motive power is needed. Not only does this reduce the use of petrol, but it also (arguably) results in healthier soil, as horses do not compact the soil in the vineyard as much as tractors do. And, of course, they provide fertiliser. But this would fall foul of some people’s view on animal welfare. I’ve also talked with wine makers who have chickens that roam the vineyards. The idea here is that the chickens not only eat insects that might otherwise harm the vines, but in grubbing around, they also loosen the soil. To be honest, I have no idea if this would fall foul of a strict view of not using animals as a labour source. The chickens, presumably, are happy to eat insects. But yet they are being kept and used.

I mentioned fertilizer, and this is the second point. In organic farming, the focus tends to be on what is not used – modern, synthetic pesticides and fertilizers. But their replacements may well be animal-based, particularly when talking about fertilizer. Cow manure, for example, is often a part of organic fertilizers. But this relies on the use of animals. Where does one draw the line? Would manure gathered from wild animals be acceptable, but not those from farmed ones?

The third point concerns biodynamics, and follows on from the question about where you choose to draw your lines. Many sustainable wine-makers follow some form of biodynamic farming, or draw on its practices, whether they are certified or not. Among other things, biodynamic farming relies on ‘preparations’ that are sprayed on crops or used as fertilizer. Most of these involve animal products at one point or another. The most famous preparation is based on cow manure that has been aged while buried in a cow horn for several months. Another preparation involves the use of a stag’s bladder. In other words, if you extend your veganism this far, a good many sustainable wines will not be vegan, even if they are certified as such.  Other aspects of biodynamics also involve animals. ‘Peppering’ is the process of spreading the ashes of a particular pest in a field in order to repel that pest. Like most things involving biodynamics, it’s a bit more complicated than that, especially in the philosophy that underpins it, but that’s the basic idea.

What is the point of raising these issues? Besides the basic aim of drawing attention to this potential conflict of philosophies, there are two more abstract points that can be made, although one shouldn’t confuse ‘abstract’ with unimportant. The first is to be aware of your categories, and what they imply. This post is partially the result of a tasting I went to on biodynamics wines, and some of these points were raised there. I hadn’t thought critically enough about the categories the discussion encompassed. Once I thought a bit more, it became clear that there were spaces were the categories not only did not overlap, but were in active opposition.

The second point is to be aware of your certifications, and what they cover, or don’t. Just because a wine is certified as being something (vegan, or sustainable) does not mean it will fit your particular understanding of the term. In the end, is that wine (or anything else) sustainable and/or vegan in the same way you understand it? Quite possibly not. In other words, compromises may have to be made. If they conflict, which of your personal philosophies is more important? How do you decide? I don’t have an answer; I just think it is important for people to be aware and make their own choices.

(Originally published on the Anthroenology blog; this is a lightly edited version.)